I just finished reading Michio Kaku’s Physics of the Impossible, which explores and explains a lot of the different things we see in science fiction novels. One of my favorite chapters was on telepathy.

te·lep·a·thy (noun): the supposed communication of thoughts or ideas by means other than the known senses.

Guess what? According to Michio Kaku, telepathy is not impossible – just not the kind of psychic powers that we see on tv – like mind reading, future telling (sorry, tarot aficionados!) The most interesting part of the chapter though, in my opinion, was a brief history on telepathy, which included the animals that duped humans. Here are the psychic animals (all horses, for some reason) that Kaku mentions.

(A photograph of Clever Hans, not Morocco, since obviously no one could have photographed 1590)

Morocco the Horse:  One of the earliest cases of a psychic animal, Morocco the Horse lived in the 1590s. Morocco could spell, do math, and identify people in a crowd. He was so popular that Shakespeare wrote him into his play, Love’s Labour’s Lost as “the dancing horse.”

Moth: Why, sir, is this such a piece of study? Now here

is three studied, ere ye’ll thrice wink: and how

easy it is to put ‘years’ to the word ‘three,’ and

Clever Hans: In the 1890s, there was a miracle horse who could perform all sorts of math problems. He could divide, multiply, add fractions, and more! But how can a horse do math, you ask? People believed that the horse was able to read minds and therefore divine the correct answer. For example, if you asked him what 36 divided by 6 is, Hans would tap his hoof 6 times. 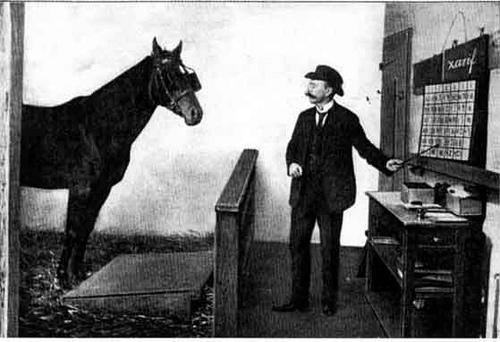 Lady Wonder: In the 1920s, Lady Wonder was known as a miraculous talking horse. If she had alphabet blocks laid out in front of her, she would be able to knock them down in order to spell things, such as the name of a member in the crowd. Over 150 thousand people came to see her, and she even confounded famous scientist J. B. Rhine, founder of parapsychology.

An Advertisement for Lady Wonder

Unfortunately, none of these horses really had psychic abilities! Clever Hans was able to read the body language of his trainer to know when to stop stomping his hoof, and Lady Wonder was responding to the way the trainer held the whip. This form of  involuntary and unconscious cuing by the trainers is now known as the “Clever Hans” phenomena. While I was looking up photos to share with you, though, I found a ton of additional reports on psychic animals – even if it’s just a parlor trick, I think it’s a pretty neat parlor trick! Do you believe in paranormal activity?

One thought on “Physics of the Impossible – Psychic Animals”